An installation that constist both of ready mades like the convector grids, the pavement sculpture but also of, collages and video.

Lisa Torell’s (b. 1972, Gothenburg) piece Cm by cm, metre – by- metre, km by km is a collage of photographs, writing and painting, is described by the artist herself as “construction-based interpretations of a city space.” Torell analyses mass-produced materials and designs in a deliberate, pragmatic manner. Concrete, asphalt, and graffitied wooden benches come together to create momentary reflections, factual descriptions and personalized commentary. The collage could be viewed as an attempt to allocate a new status to things of little value. Lisa Torell has worked in New Belgrade, a municipality of the Serbian capital Belgrade, which was built in the late 1940s in a characteristically Communist fashion. Today it is the city’s fastest developing area, as well as the financial centre.

For over a decade, Lisa Torell has been attracted to the public sphere. She begins by questioning just how the spaces themselves came about, what their purpose is, how they look. She unscrambles the complex interaction between politics and aesthetics, and often returns to standardized settings, constructed without bearing any real aesthetics in mind. Through the use of sculpture, collages, installations, the written word and performance art, she comments on the aesthetics of the public sphere, or better yet the lack of aesthetics present, and why this was allowed to happen. Lisa Torell commonly works on site, involving herself in close conversation with selected places and situations. For the Bonniers Konsthall exhibition, she has worked with the museum’s proximity to the heavily trafficked street Torsgatan.

4 FEB - 5 APRIL An exhibitiion on cities in transformation, by Camilla Larsson

This spring’s first exhibition at Bonniers Konsthall has the city as its theme. Six artists depict encounters with urban centres from across of the globe. The city is portrayed as a place for interpersonal meetings, historical power games, and global politics. Above all, City Walks poses thoughtful questions around precisely what spending one’s life in an ever-expanding urban environment entails.

Amidst a labyrinth of demolished walls and overgrown bamboo, video installation Intercourses is screened. Large projections display imagery of a camera following three African men around a city resembling Paris. They move throughout the city accompanied by the sound of a persistent wind, as if the city itself was emanating a disconcerting tone. The camera pans over boulevards and the Eiffel Tower, yet something seems awry. Store signage written in Chinese and skyscrapers towering above the whitewashed facades reveal that the installation is filmed in China, not Europe. Danish artist Jesper Just came up with the idea of filming in Hangzhou when he visited the city’s replica of Paris. China, more than any other country, has indulged in this building trend. Copies are built at a blinding rate to accommodate the rich middle-class. Numerous ghost towns have been erected, and remain gapingly empty, awaiting the moment when the country’s tiger economy makes another leap forwards.

Jesper Just is one of many artists interested in the cityphenomenon. Contemporary cities transform at an incredibly rapid rate, provoking heated discussions around migration, urbanization and cultural belonging. How can we manage the complex relations that extend beyond national borders? How do those relationships affect urban life? By 2008, more people lived in cities and urban centres than in rural communities for the first time in the history of humanity. The numbers themselves speak in volumes.

The primary theme in City Walks is to involve artists who depict the notion of how it is to live in and maintain oneself in a city. Jesper Just, Sophie Calle, Hala Elkoussy, Carlos Garaicoa, William Kentridge and Lisa Torell are all interested in how the urban space is experienced. We encounter lived experiences – either staged or self-perceived – in their artworks. The artists view the urban setting as a collection of powers acting uponthe individual.The artists display a great sensitivity to the state of mind created by living in a city, almost as if they are feeling the city itself. They listen to the whisperings of the city walls, the layers of history to which they have borne witness, noting which sensations arise when a hand touches a stonewall worn down over time by all the bodies to have leaned up against it.

The exhibition creates a space within the space. We meet Cairo’s winding streets, which bear witness to past colonial rule. We encounter a replica of Paris located an entire continent away from Europe. Johannesburg serves as the backdrop for the tale of South Africa’s political history. We visit the Bronx in New York City in the early 1980s, far from its contemporary status as a tourist destination. Havana’s ruin-like architecture, a direct result of Cuba’s economic deadlock, serves as the foundation of a visionary model and sculpture construction. The current worn-down condition of the housing built during the Million Programme, implemented in mid-1960’s Sweden to build one million new homes, is transformed in a poetic close reading. The exhibition also includes a number ofcity walks – both factual and imaginary –led by artists, architects, authors, and choreographers as we continue searching for the city.

For more than 10 years, Lisa Torell has been drawn to the public space. Her journey begins with question as: How has this space been created, whar is its purpose, what does it look like? She dissects the complex interaction between politics and aesthetics. She often returns to standardized settings, those constructed without real aesthetics being taken into concideration.

You have described your collage Cm by cm, metre-by-metre as "artisanal interpretations of a cityspace". Just what do you mean by this?

City park benches, sidewalks, rubbish bins, pathways, bike trails, small striped structured sections at bus stop are incredible beautiful. In terms of shape, substance and meaning. When separated, the resemble species in different biological populations, components in a system that rather than originated from the natural world have developed out of the public sector. I believe that we can alter one picture through other pictures, that an experience can be affected through other experiences, that language is not a neutral entity. The collage is one part of this concept, and has been developed by me lying on and touching the objects and photograhing the bench or whatever it was I was creating a portrait of as if it was on verge of bounding off at any moment. Like an animal. That is another facet of making the standard unique. painted photographs, the original copied.

In which cites are they made?

Stockholm and Belgrade. The background of the work, photography and texts were all created during an artists in residency I had 2012 in New Belgrade. New Belgrade is s a distirict of Belgrade, Serbia, with brutalistic, socialist utopian architecture. Rosengård in Malmö and Biskopsgården in Gothenburg, both Swedish neighbourhoods, served as models.

You have worked with surburban environments on a numerous occations. Have you found that as an artist, you were expected to present and work through a particualar issue?

Yes, every time a workshop or exhibition takes place outside the city centre, there is a sort of expectation that it would be grounded in the local community and that this should be visible in the work. Just what does being grounded in local community mean from an aesthetic, contextual standpoint? In my experience, socioeconomics are all too often bound together with aesthetics and architecture. The fact that the word segregation is synonymous with housing projects, yet never with single-family homes, signifies that the same message and the same sourcesare being recycled over and over again. How can we possible change our perception of an environment if we never change our method of perceiving, of seeing?

For the exhibition at Bonniers Konsthall, you have been involved in dialogue with heavily traficked Torsgatan, the street on which the museum is located. Tell us about this.

Torsgatan, for example, has a pedestrian crossing that facilitates museum guests to cross the street with ease. We take this for granted, when in actuality designated crossings do not exist everywhere. For me its the proximity to the place, rather than the distance from it, which is a key factor as well as having various of perpectives. Just as with a relationship, it must build, be granted time, consideration, acknowledgement. Before this, the discovery. The work embodies facets of my discovery process. A close study of Torsgatan.

Texts in the collages, Lisa Torell:

Figure 0534.
I knew just what I wanted to say, but the words stuck in my throat. The material. The cement.
The grass. The sun. It was more than that.
Crept along, spied, the distance was infinite, but growing shorter.
Now I was close.

Figure 0191.
I was close enough to touch them. But I never did. Just looking was enough.

Figure 1433.
Recognizable parts of a mega structure,
large-scale monotonous solitary, on and on again,
the forest the landscape the ocean.
(Detail)

Figure 0275.
One allows for the possibility of two.
Bent concrete, grey. Found alone, these in pairs.
Approximately 35 cm tall. I liked the stone, in the concrete.

Figure 1433.
Recognizable parts of a mega structure,
large-scale monotonous solitary, on and on again,
the forest the landscape the water.

Figure 1235.
The letters lay there in a pile on the floor, and I couldn’t help but to place them in a different kind of order.

Figure 0593.
My experience became literal, once I had to
explain it.

Figure 1105.
I had not yet seen anything more beautiful. In every clearing they rose one after the other, proud in the landscape. It was as if planned, that only I would get to see them. 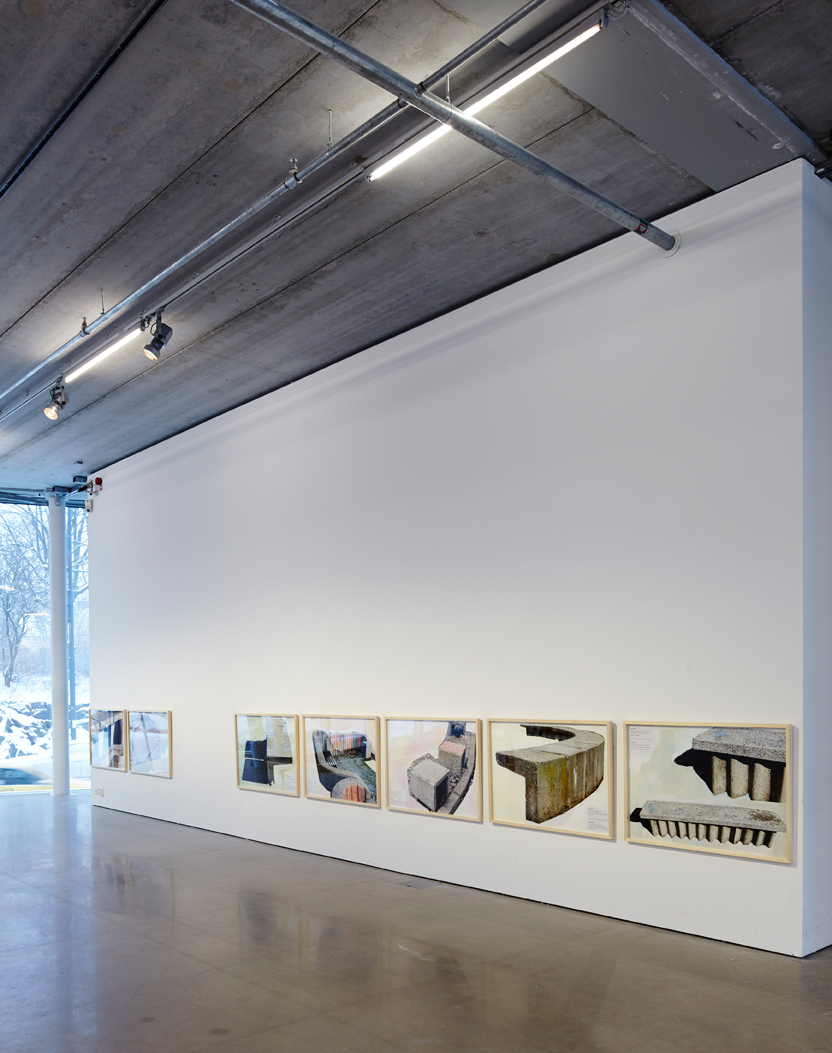 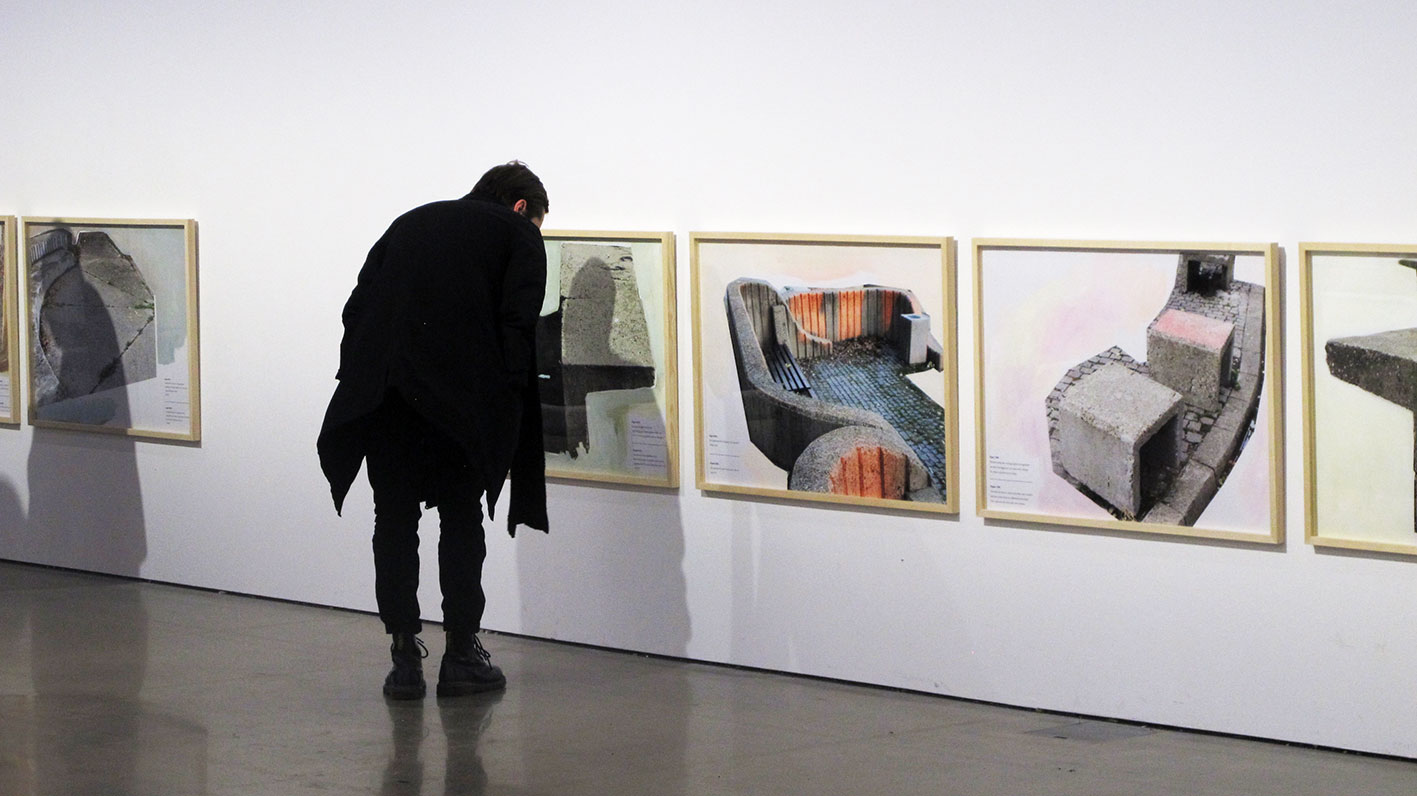 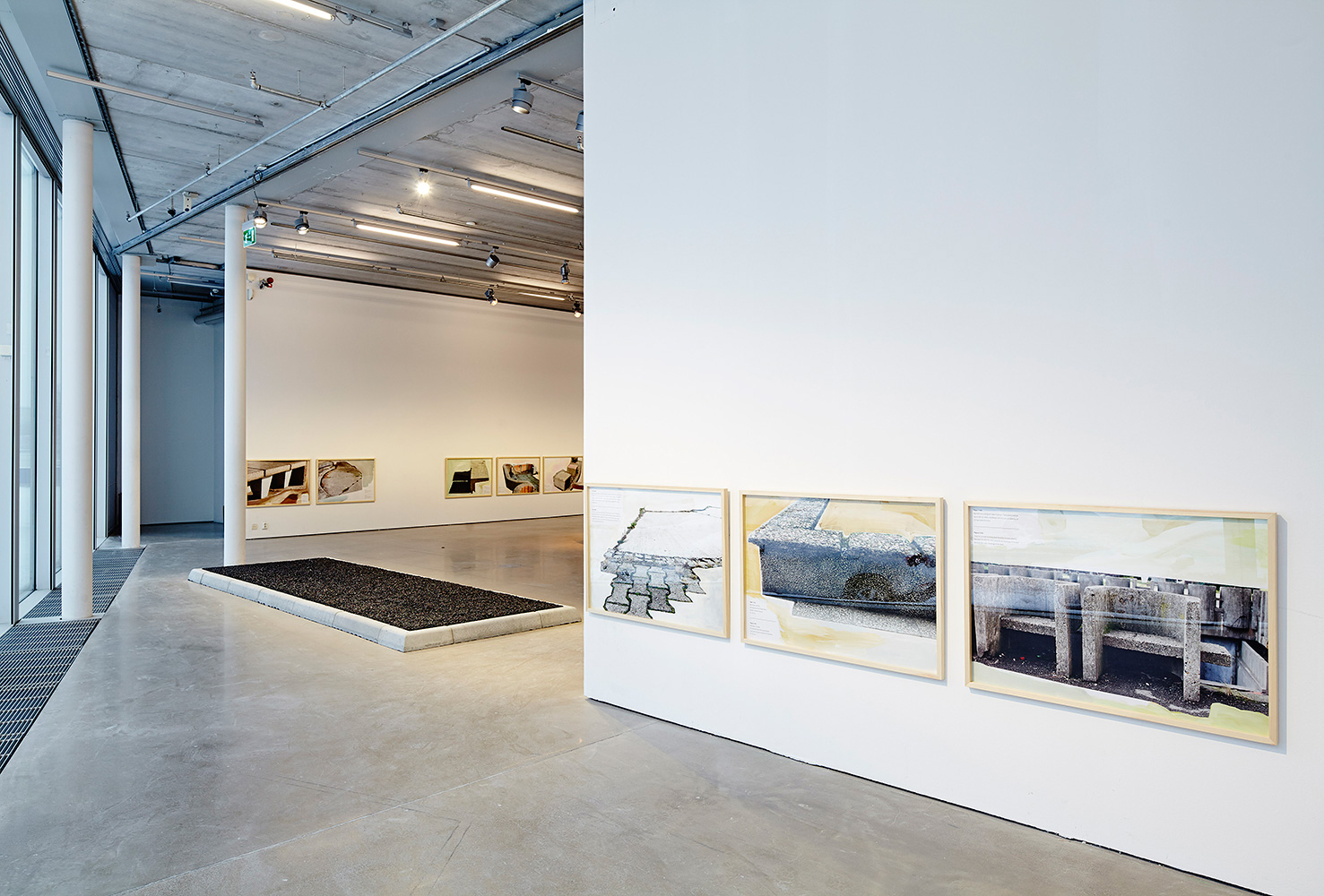 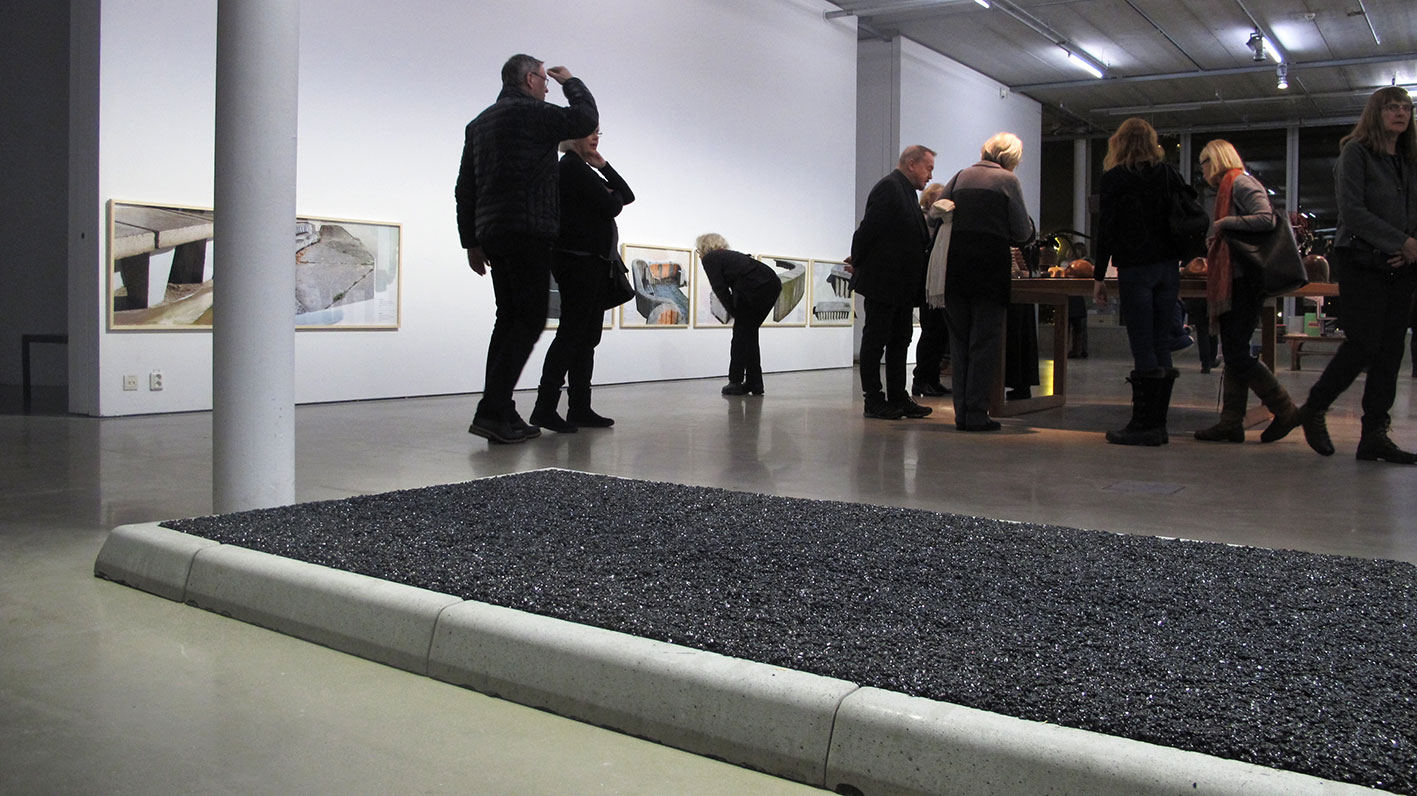 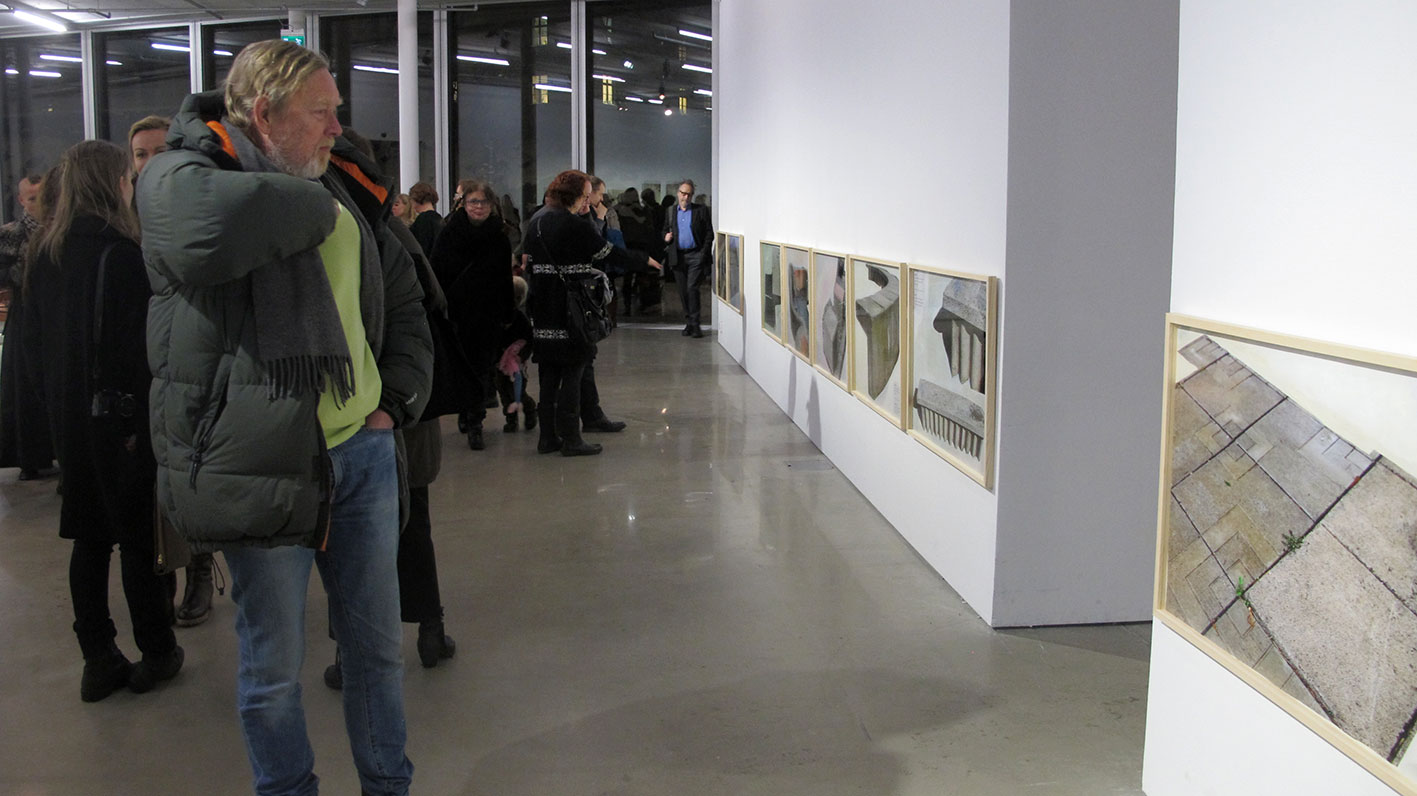 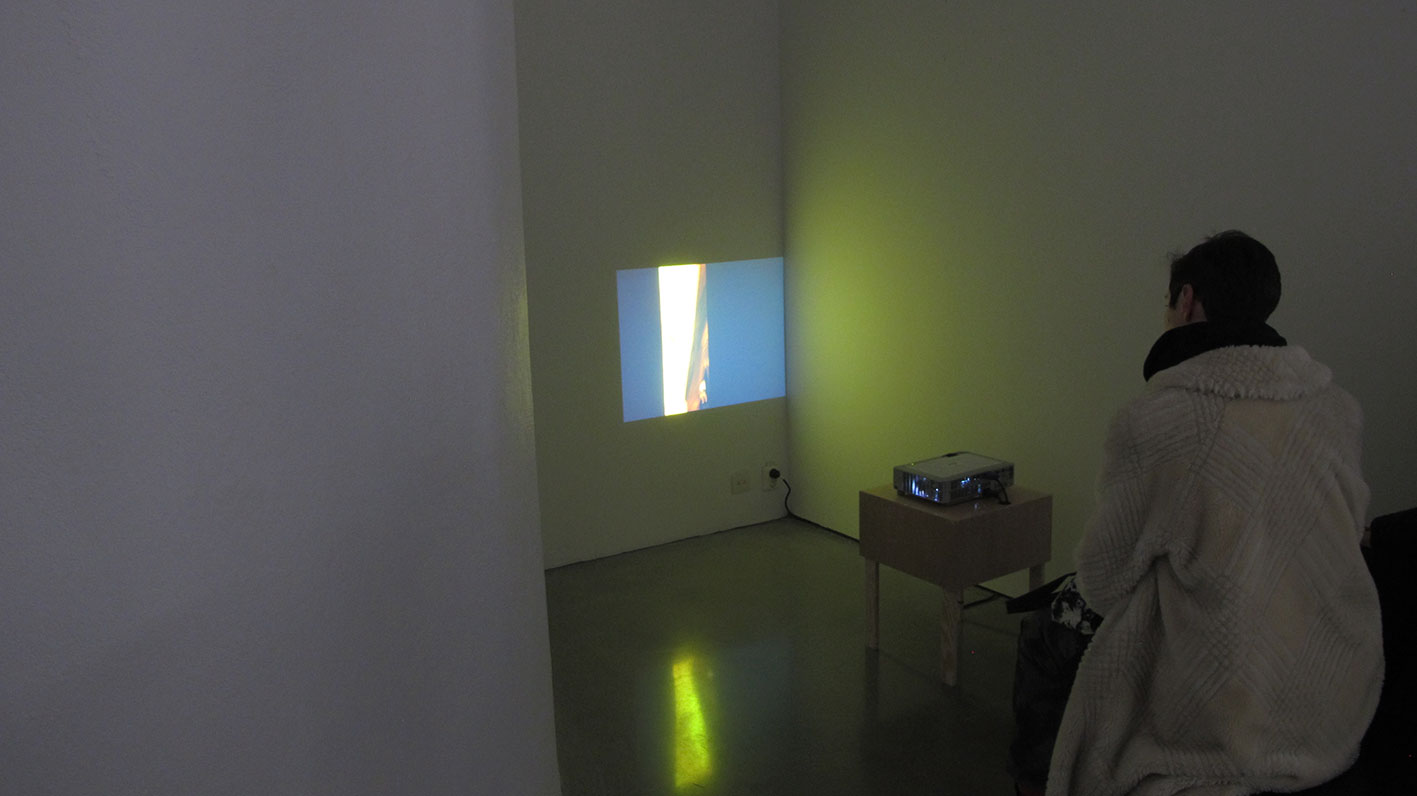 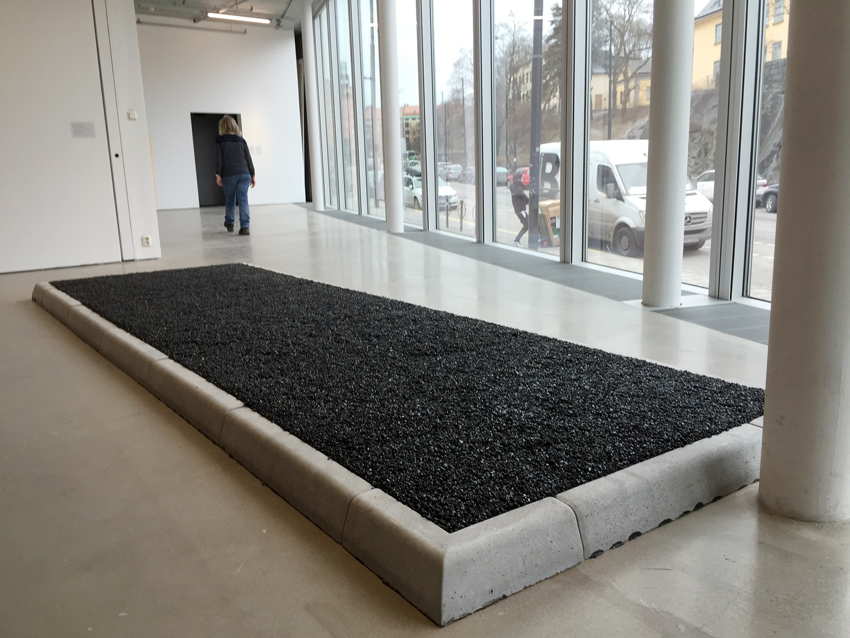 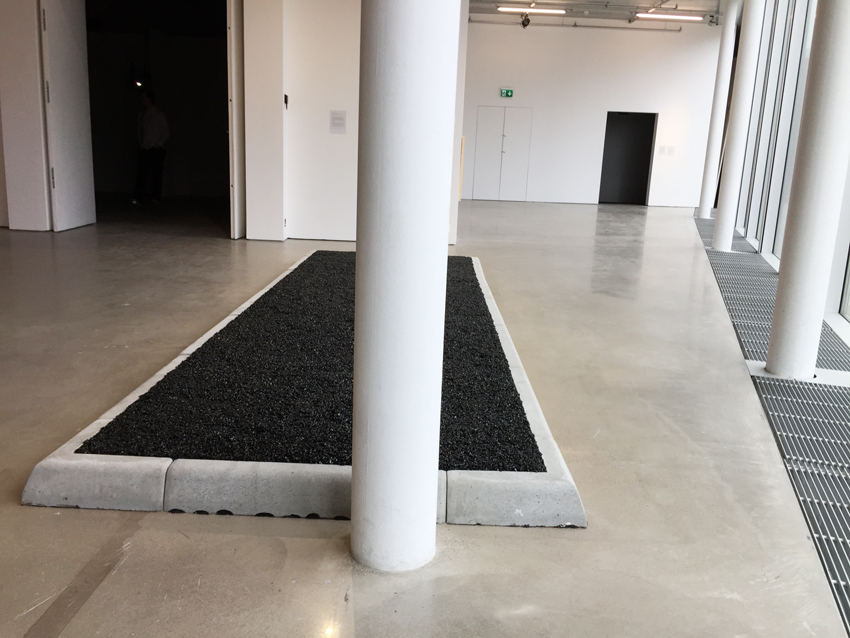 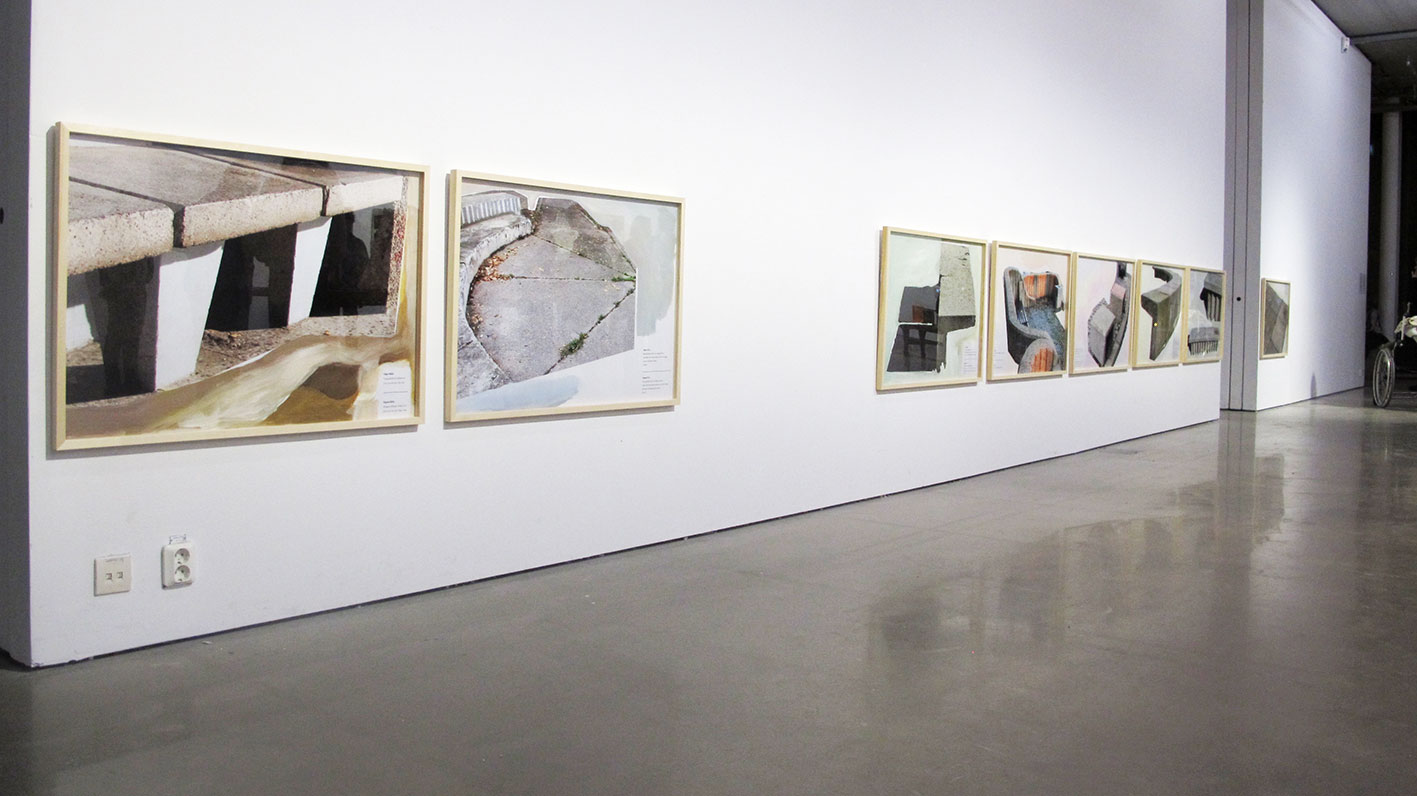 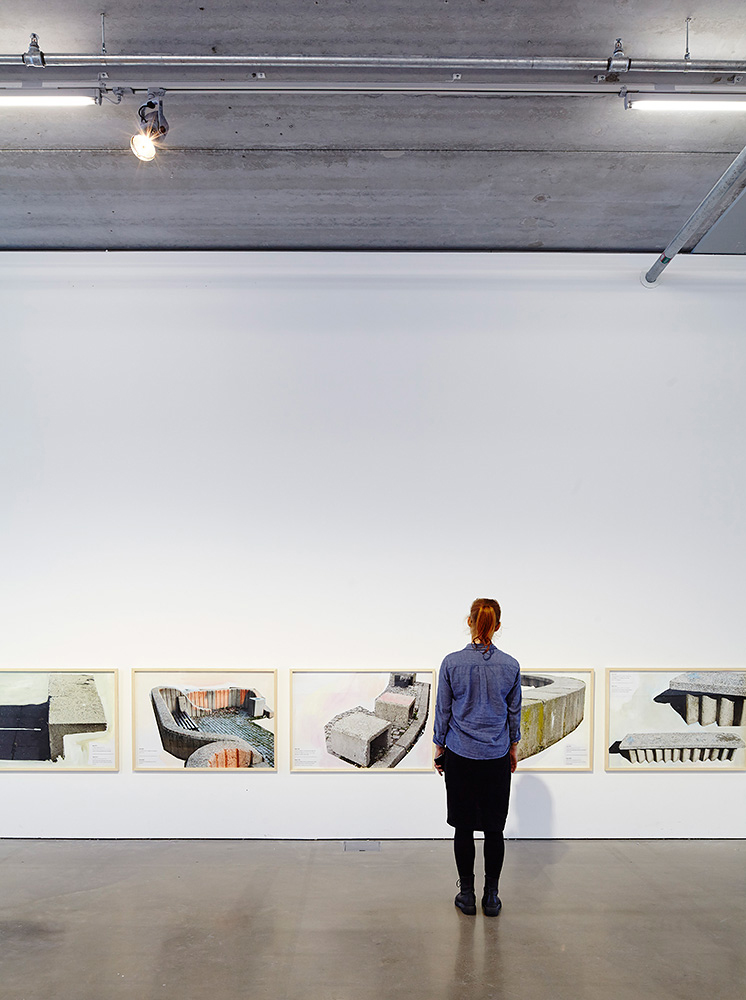 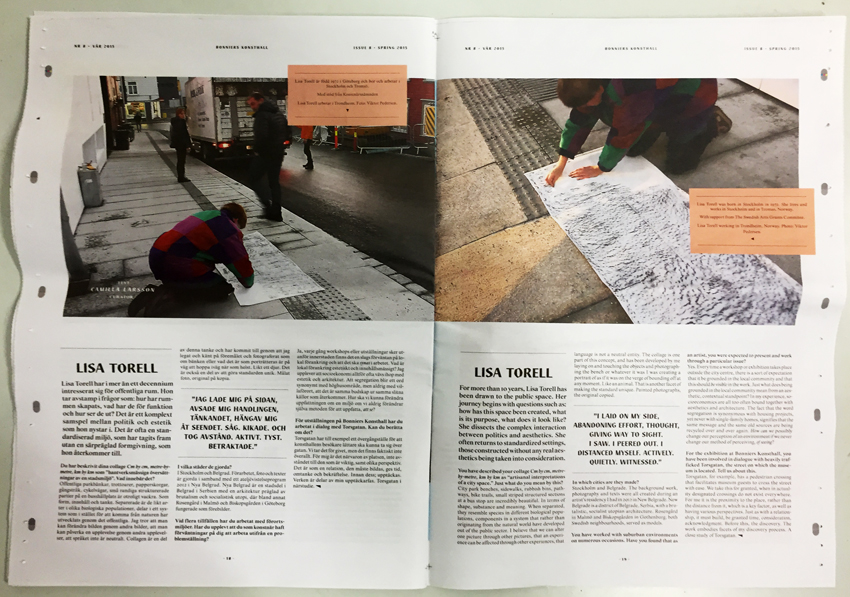 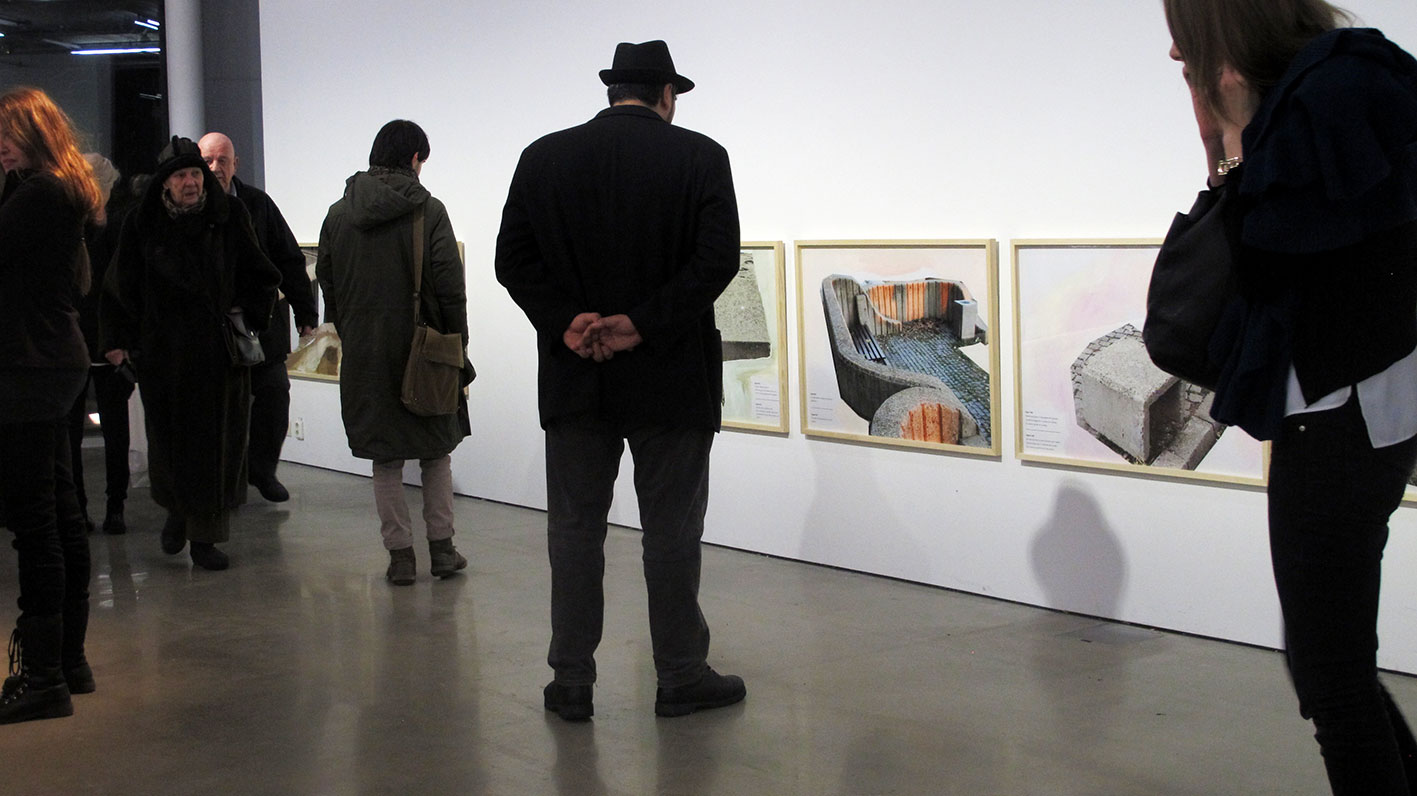 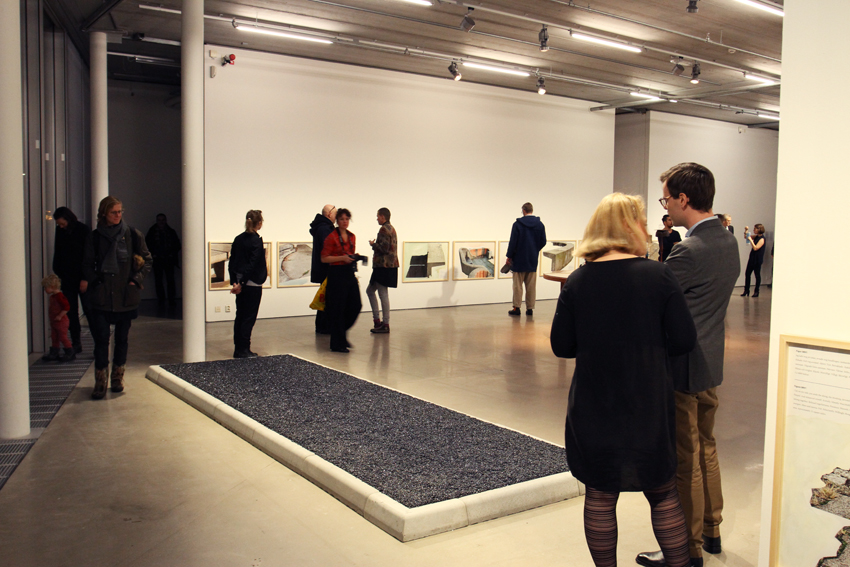 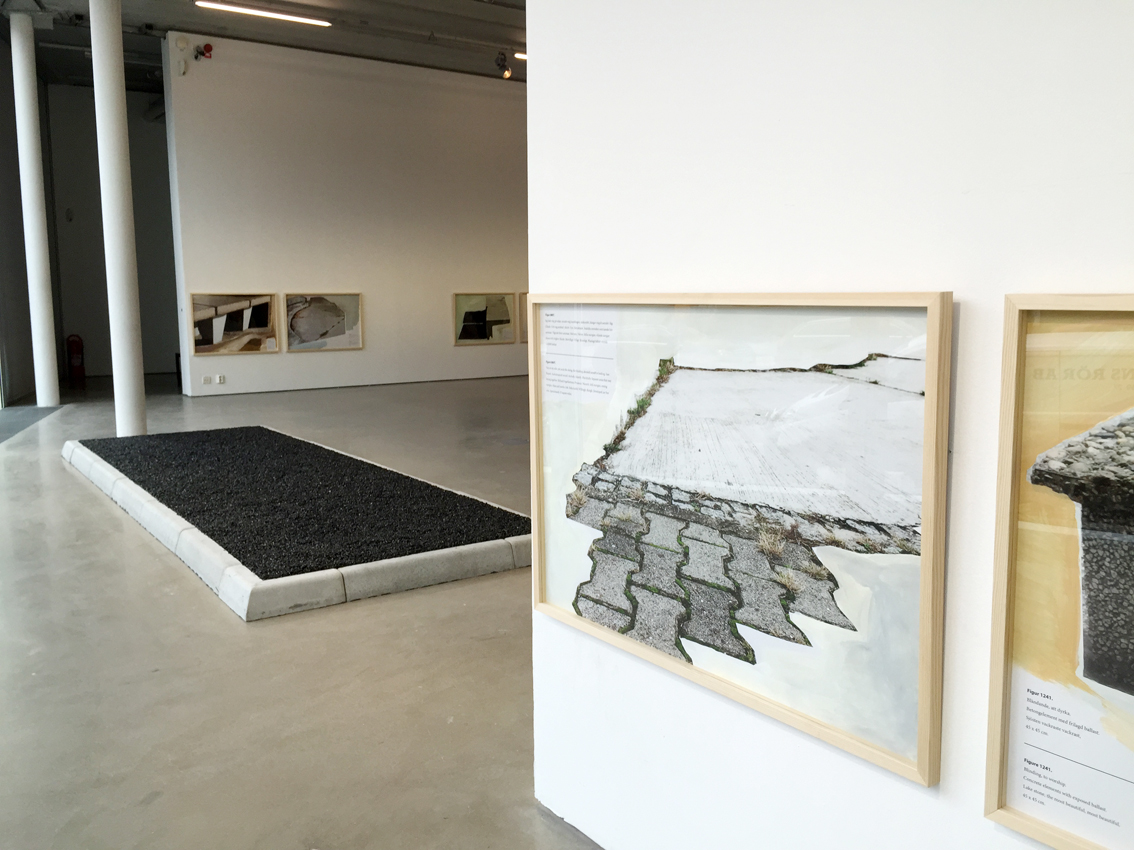