THE PAVEMENT, A MASTERPIECE

8 videos (In situ video souvenirs with shifting durations 10 min to 4 h), 5 sculptures in a large kontext and site-specific installation, with works made between 2014-2019.

The Pavement, A Masterpiece:
Folder in Eng >
Folder in Swe >

FOR MORE THAN a decade, the artist Lisa Torell has focused her artistic practice on public and semi-public spaces, using a site-specific approach to enter into close dialogue with chosen places and situations. Through her presence, and in the presence of invited people or random passers-by, she creates contexts that expose and twist the structures and purposes of the locality. For Lisa Torell, every public space is specific and shaped by cultural and social, aesthetic and political circumstances. Aspects of the welfare state are scrutinised and the works reveal how care and attention, indifference and neglect are manifested materially in and through our urban and public spaces.


With a close examination on site, working day and night, Lisa Torell discovers signs of care and consideration, and a lack of the same. She is the body and the eye, making her discoveries simultaneously with the viewer. Bit by bit, society and systems are laid bare, in paving stones, detritus and imprints. Already outside the entrance to the exhibition, visitors encounter this care. The new work The Presence of Society, the Institution and the Artist consists of three readymades; two sand boxes and a chair. One of the sand-filled boxes stands outside, to assist on icy days. The other box and the chair, placed in the exhibition, have been thoroughly made over by the artist.


Several of the works shown at Marabouparken were produced within the framework of the Norwegian Artistic Research Programme, for which Lisa Torell presented her thesis Potential of the Gap, in spring 2018. In her research, she explored perceptions and functions, systems and logic, which she set in motion. She describes the gap as an unwanted state, for instance when a door cannot be closed properly: “The gap works when it arises as a contrast to the other. It serves as an opening and an option. The gap emphasises both movement and the relationship to one thing or another. Thus, to me, it is a metaphor that describes something greater. A potential that, by virtue of its appearance, not only uncovers systems but also enables perspectives, understanding, and perhaps even renegotiation.” Her practice and research are informed by a desire to break – to create gaps. Whether this is by holding the microphone a little too close to her mouth or by departing from the agreed aesthetic depends on the situation and the material.


In Human Population, performed for the first time in Norrköping (and later in Sundbyberg), the artist takes a group of participants on a guided tour of the snowy urban centre. She spreads a large, transparent plastic tarpaulin outside the Municipal Library. As a pastel crayon frottage of the pitted ground emerges, she addresses the group and other listeners who happen to turn up. She talks about accessibility as a human right. About inclusion and the right to vote. About gravel against asphalt, and asphalt against wavy concrete slabs – not for their decorative qualities but for the directions they provide for those
with impaired sight. The tour continues through the centre, stopping at other places, and is re-enacted in Sundbyberg in 2018. Similarly, she takes on the pavements in Tromsø in the work The Pavement, a Masterpiece. This ethnographic city walk highlights the movements of society and individuals in relation to visual and spatial codes. Using spray paint, she marks out the image of an accessible society.


In the backyard of the gallery Depo in central Istanbul, Lisa Torell painstakingly sweeps the asphalt clean from gravel and dirt in her work Sweeping (Figure 2224). This is May 2016. She is wearing the municipal orange-red summer uniform, consisting of a t-shirt, dungarees, crocs and a high-vis vest, she holds a broom and shovel. Night has descended. A searchlight illuminates her as she continues to sweep. Throughout spring, the media have reported on violent conflicts in the city. Bombs, protests, police, armed vehicles, medical staff. The street and park maintenance workers clean up. Multiplied similar pictures of a complex situation. Lisa Torell asks herself: What happens to the public sphere and those who represent it when it is no longer possible to trust the public sector? Does it affect our attitude to people in uniforms, such as park attendants, police and nurses? Can a public space really be protected without protecting the people for whom it exists, and whom is the public space actually for? What does cleaning up after a conflict imply? Whose history and what experiences are swept away?


Lisa Torell’s performances have their own logic, a course of events where she puts herself at stake. Exposes herself. Not only to the eyes of the beholder, but also to the unpredictability of the public space. What does it mean to leave your comfort zone, and why is it necessary? Her performances and installations also highlight her own role as an artist and a citizen. And hence the rights, responsibilities and guilt that we all share. In her thesis, she writes, “Performativity or performance involves a sensitivity to the moment similar to that when you work in the public domain, where you can prepare yourself for many things, but not for everything, you also need to be inventive, to juggle with contexts and materials, for each new encounter. A central method has been to introduce risk. Visibly, before the audience. To thereby intensify the situation. As if to charge myself up in order to cope with not being in full control, and thus to be able to force myself into total presence and experimental fervour in the here and now. To increase concentration. For everyone. A successful situation is often one that verges on failure. When none of us really know what will happen next. When everyone is in reaction, interaction and intra-action1 and I feel that I can experiment in the present. There should be a slight trembling.”


“Figure” often appears in the work titles. This prefix helps her categorise and systematise her own research material and facilitates the search through what has come to be an extensive archive. For more than a decade, she has filmed the people who maintain our communal spaces, asphalt-layers, garbage collectors and others, and their movements. In different parts of the world. With a fascination for the experience-based and precise knowledge, the manual skills, and the almost automatic doing, she also raises questions about how doing in one place affects how we experience that place.


In the work (Figure 3582) Pleasure Culture, an elderly man is the doing body, meticulously repainting a red-and-white striped fence in the ferry dock in Nowy Port, Gdansk. Nowy Port is a historic site. This is where the Second World War started. It is also where the Solidarity movement of the 1970s and 80s began, followed by an innovative art scene. Today, the area is poverty-stricken, with unemployment and a high average age. There are plans to gentrify the district, and the local council speaks of authenticity. The old man paints the enclosure with care and attention, the darkness illuminated by a spotlight that tracks his movements. His labour is staged. The only instructions were that he should paint as carefully as possible, taking the utmost pride in his work. Flaked paint is covered by a crisp, new layer. Realities that are enacted and made visible. “With light you can tame the gaze,” says Lisa Torell. Painting is recurring in her practice. Paint that fills cracks, covers and protects. Paint that captures the patterns and stories of the surface. Painting as potential. As radical and political action. As explosive as any other artistic medium.


Take Care of the Garbage, performed in Venice in 2017, reveals the gap between the city and its representation, what we are allowed to see and what not, in the day and night respectively. Lisa Torell describes the contrast in the city, where clean washing is supposed to hang to dry over certain pedestrian streets, while the Hilton gushes out water from its washing machines straight into the sea every night. Nocturnal silence descends and the city prepares for the following day. Goods arrive and garbage is taken away. Surfaces are swept and cleared of the debris from the evening’s adventures. For ten consecutive nights, Lisa Torell goes out to film and record sounds. District by district. Her work develops into a silent public walk accompanying her to the designated place where she drops off the week’s garbage. Glass jars and bottles tinkle as she navigates the narrow alleys.


Lisa Torell is part of the interdisciplinary artistic project Residence-in-Nature2, where practitioners are invited to live in and work with a specific area during a limited period. In 2018 and 2019, the project is based in the village of Lainio in Norrbotten. Lainio is the oldest continually inhabited settlement in the Torne Lappmark. Before the Luleå Biennial 2018, she travelled there with nine other artists. In a form of public space that differs from the urban sphere where she usually operates, the work That What Was Seen, Could Be Seen began to emerge. In a region where mapping has been represented partly by the Swedification process and by eugenics, Lisa Torell focuses on the relationship between public spaces and the artist role, and asks what it means to stake out a place, a region, a landscape and a society. The question is formulated with a spray action.


Highway 25, Shared Society Means a Common Debt was a collaboration with the artist Johanna Gustafson Fürst, which also took place within the framework of Residence-in-Nature and the exhibition Start, Opening, Beginning, Continuation in 2016. The work consisted of three weeks of site-related interventions in eight places around National Highway 25 between Växjö and Skruv in Småland. The interventions featured performances and installations, but also preformances, a term Lisa Torell uses for the things that happen before an opening or performance: How a place is established through being, exploring or staging. Raking the roadside, mending the cracked asphalt, wearing home-made knee pads. All the works highlight the single or plural individual. The result can be either an action or the residue of an action. What we as separate individuals do in the collective space, and the “public image” it can contribute to creating.


Lisa Torell uses the inherent structure of places or their specific purposes as her material and method, and together with the audience carves out a distinct now in the now and creates a new place. The works are made in the place they explore, and the place is also the context of the works. The works are usually shown in the place where they were created. Here in the exhibition, we no longer have the possibility to experience the works directly in situ. Layers of possible readings remain in the original place. Here, the works are shown as documentations. Lisa Torell calls these careful translations In-Situ Souvenirs, referring to, elaborating on, and paying homage to the French conceptual artist Daniel Buren’s term Photo-Souvenir. For Buren, the documentation of a site-specific work can only be a souvenir of the original work, never the work itself. The temporary work that evolved somewhere else simply no longer exists. Instead, new interpretations arise, where the different works and their places communicate with each other, with the space here, and with us as viewers. Each work is an independent exploration, and together a collective one, where other systems are made visible and new gaps appear. 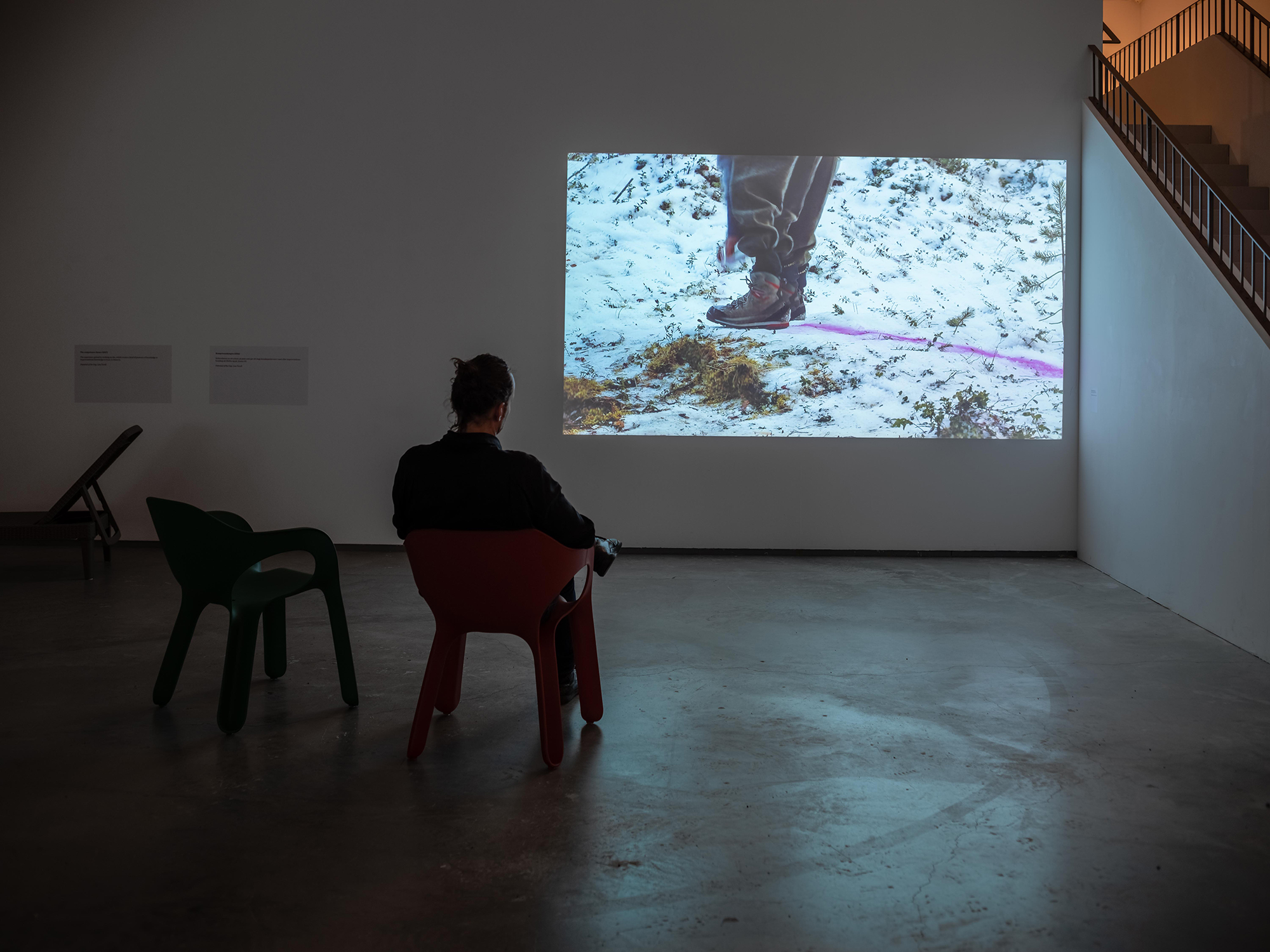 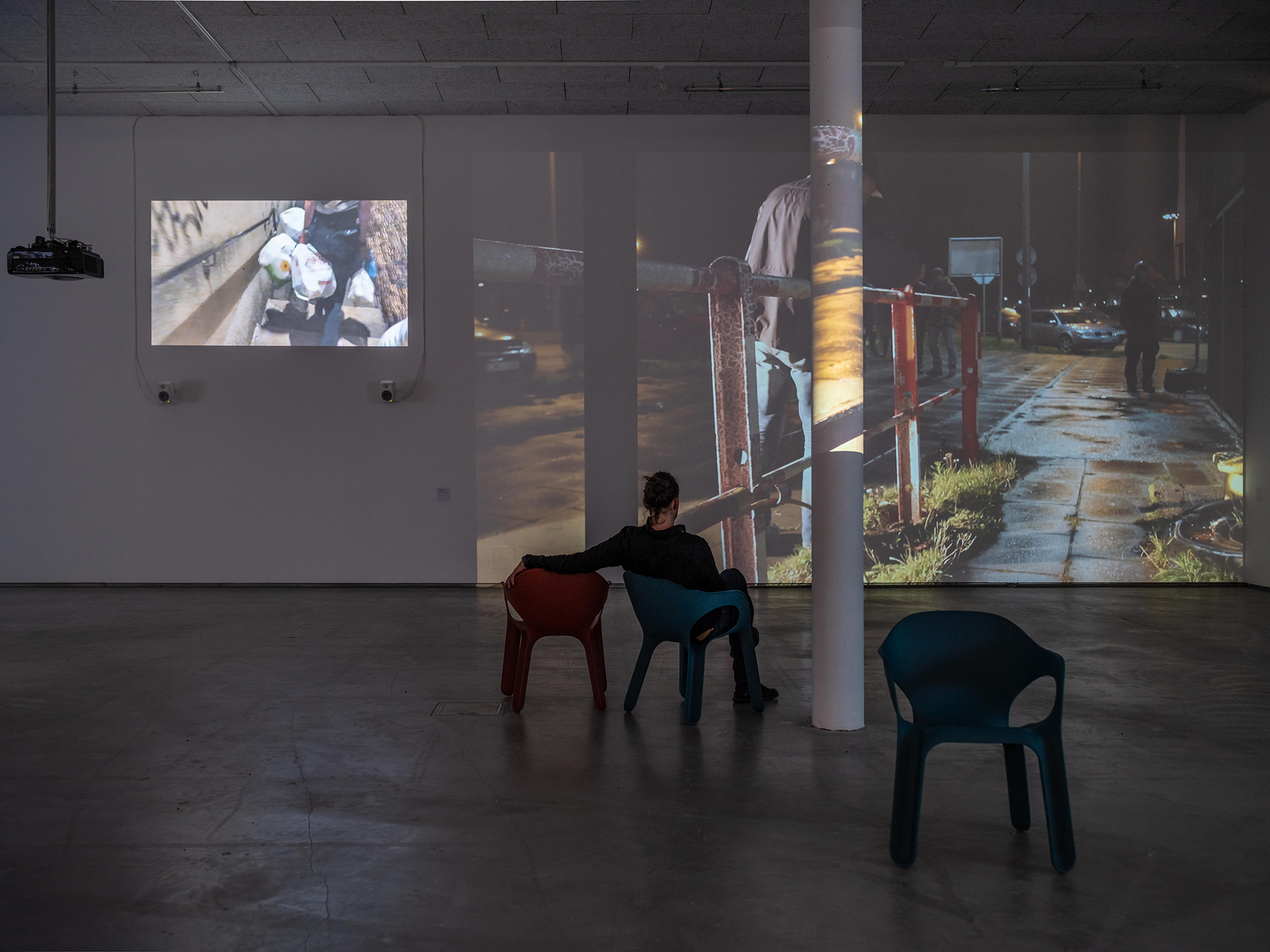